Kelsey Serwa is back home.

Serwa returned to a hero’s welcome Thursday afternoon after winning a silver medal at the Sochi Olympics nearly a week ago. 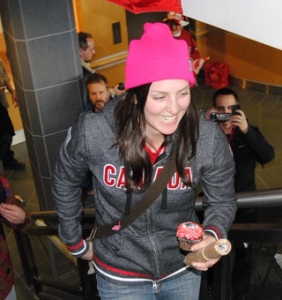 “This medal isn’t just mine. It belongs to all of you,” Serwa told the crowd at a makeshift podium set up on the stairway above the departure.

Emotional, Serwa stopped her speech twice to hold back the tears.

“This was above and beyond anything I ever expected,” Serwa stated during a special news conference with dozens of assembled media.

“It was so cool. I thought I was going out for the medal ceremony again. It brought me to tears – that’s how much it means to me.”

Serwa, who finished second to teammate Marielle Thompson in final had both her parents and grand parents cheering her on at the finish line.

“That was so cool. Every round that I got through I kept looking for them in the crowd,” recalls Serwa.

Serwa says she had no problem finishing where she did behind Thompson.

She recalled Thursday watching the men’s race the day before and seeing the disappointment in Brady Leeman’s face after he finished fourth in the final. 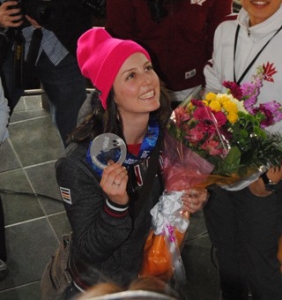 “I definitely didn’t want to finish fourth,” says Serwa. “Every race I go out I fight tooth and nail to get on the top of the podium.”

“With Marielle in front we were working really well together and I know how she skis…I really trust her. But it was the most amazing feeling coming over the finish jump knowing we were one-two and that we were bringing the gold medal back to Canada and one more (silver).”

With what is becoming a Canadian tradition, Serwa had her own ‘lucky loonie story.

The Olympic games were the culmination of the season for Serwa who will skip the final two World Cup ski cross races to give her knee a chance to rest..

Serwa underwent her second knee surgery just 11 months ago and didn’t ski the races leading up to the Olympic Games to let her knee heal.

She is scheduled to head to Whistler to visit family and friends.

As for the 2018 Olympics in South Korea, Serwa says she hasn’t made any decisions yet.

If she is still healthy and still enjoys the sport she would like to compete four years from now for what would be her third Olympic Games.

As for her immediate future, Serwa has created the KSER Bursary Fund to support excelling student-athlete graduates.

“My overall goal is to raise $100,000 so it is self sustaining and we can help out a lot of student graduates who are also pursuing athletics at the same time.” 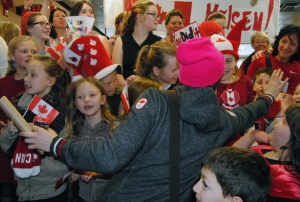