Kelsey Serwa is already an accomplished competitive skier who earned a silver medal for Canada at the Sochi Winter Olympics, but her current training efforts indicate that she has big plans for the 2018 Games, too. Here is Serwa in the gym earlier this week, speeding deftly through a core workout that looks so mind-bendingly difficult that I nearly stumbled out of my chair and and broke a rib just thinking about trying it myself. 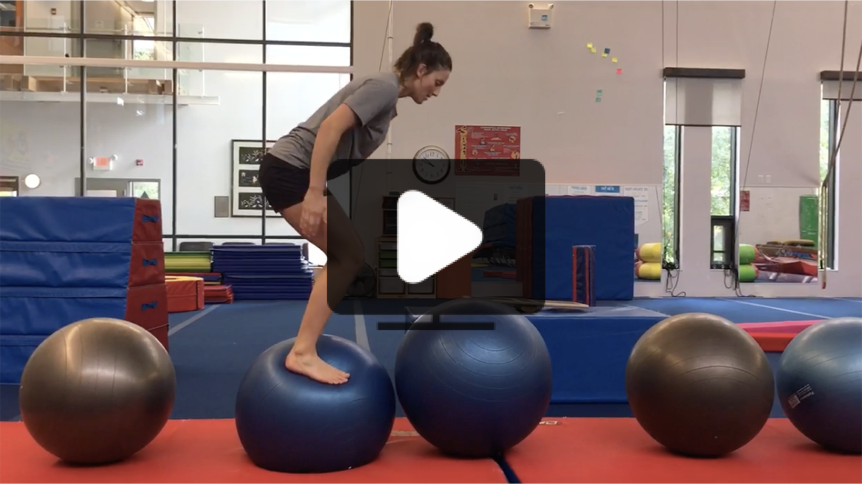 Merely standing on an exercise ball requires a tremendous amount of leg and core strength, and most of the available YouTube tutorials on the subject, like this gentleman’s, teach aspiring bipeds to start from the ground and then gingerly walk their way up, rising to an upright stance only after assuming a low-slung squat position first. Serwa, by contrast, vaults onto the ball like a damn surfer, and then, after holding that pose for a few seconds, hopscotches all the way down a perfectly-aligned set of five. Then, for good measure, she turns around and runs it back. Personally, I tend to think of the Swiss ball as a tool used for more earthbound core workouts or, occasionally, as an unstable surface on which to complete various dumbbell exercises. Which probably goes a long way in explaining why Serwa is a world-class athlete and Olympic medalist, and I write on the Internet for a living. 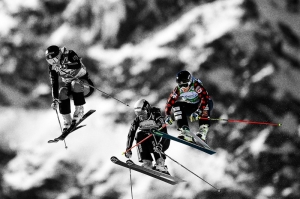 I reached out to Serwa, who helpfully explained that since her event—ski cross—entails racing head-to-head against three other skiers through a series of jumps, rollers, and banked turns, mid-race collisions are pretty much a constant danger, and that this exercise helps her learn to recover her balance and composure as quickly as possible. Unsurprisingly, she advises would-be jumpers to make sure they feel comfortable standing on a ball first. Once you’re ready to make the leap—sorry—be sure to place the ball in a safe, open area with plenty of soft places to land. Gym mats are great, but grass will do just fine, too.

The keys, she says, are jumping up instead of jumping out, and then squeezing your hip adductors upon landing to ensure a solid hold. The same rules apply once you’re ready to integrate a ball-to-ball jump into the sequence: Go vertical, not horizontal. Be advised that you will fall on the first few attempts, Serwa adds, and that even now, it still takes her a few warm-up jumps during each workout before she can get a feel for the motion and really commit to landing on the ball. In other words, don’t break this out as a party trick.

In the unlikely event that skipping merrily from Swiss ball to Swiss ball is already part of your regular workout routine, I feel reasonably confident in asserting that another one of Serwa’s preferred exercises—a game of ring-suspended trampoline-carom medicine ball toss using only her legs—is not.

Should you elect to attempt any of these feats of strength next time you’re at a particularly well-equipped gym, please, for the love of God and the physical safety of those around you, ask for a spotter first.